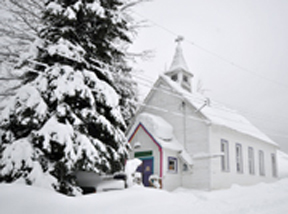 Quality Art & Crafts from $300 and under 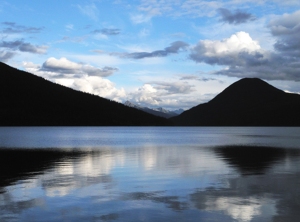 Barkerville, a national historic site from the Gold Rush Days attracts thousands of visitors each year

Wells is the home of Island Mountain Arts: Gallery, School of the Arts and ArtsWells Music Festival

Wells is a small gold mining and tourist town in the Cariboo Mountains in the interior of BC, 74 km east of Quesnel and 8 km before the highway ends at Barkerville. It was built in the 1930’s when Fred Wells discovered gold in the area and needed to make a town for his workers. At that time, Fred required his employees to be married (for the obvious reasons) and be able to play a musical instrument, a tradition that lives on!

At its heyday, Wells sported 4500 people and had a greater population than Quesnel or Prince George. The closure of the gold and other mineral mines in 1967 took its toll on the town and most of the population moved away. Today it has a listed population of just 300 which doubles during the summer months when it gains much of its revenue and jobs from the 100,000 tourists who pass through on their way to the Bowron Lake Provincial Park and to the historic museum town of Barkerville.

Wells is in a beautiful setting, surrounded by mountains, forests, lakes and rivers. Many artists, photographers and nature lovers have noticed a special quality of light here and the wonderful clear, clean air. Over the years, Wells has become known as an arts community. It is home to Island Mountain Arts, a non-profit organization that has operated a Summer School of the Arts since 1970. As well, a number of artists, performers and writers have come to call Wells home.

Today Wells maintains an active arts and outdoor adventure life of its own. During the winter months, visitors come for the world-class cross-country ski trails and snowmobiling while the summer hosts many artistic and study retreats, galleries and live performances including the infamous ArtsWells Festival which includes over 80 musical acts, workshops, theatre, film and activities for kids.

The Power of a Name

St. George is a wildly popular saint in both East and Western religions as he is honoured for having conquered good over evil. Legend has it (and there are many versions of the story!) that he did this by slaying the plague-bearing dragon, or in some legends the devil, thus freeing the village from evil. Yes, there was a princess involved, who was saved by St. George at the eleventh hour from being fed to the dragon to appease his wrath. Forever grateful to St. George for this courageous act, the village converted from it’s pagan ways to Christianity.

History of the St. George Gallery

St. George’s Church in Wells, was started by Reverend Higgs. When he arrived in the summer of 1934, some 400 people lived in Barkerville and all but 60 were workers in the mines of the yet undeveloped community of Wells. Suddenly buildings began to shoot up: the Wells Hotel, townsite houses, the company Hospital and the public school. Funds were needed to build a church worthy of Wells and were first provided with $50,000 donations from the mines, three prominent citizens at the time and prospector Mr. Wells himself. Funds were also raised from the proceeds of a play in the then new Sunset Theatre, which still thrives today. With the help of many, construction began in 1935 with the first service held at the end of the year, the day King George V died. By the Spring of 1936, the Bishop of Cariboo, Reverend George Wells, better known as the Fighting Bishop, came up and officially dedicated the church to St. George. He did not consecrate it so that all denominations could use it. The church ran continuously until 1966. In 1990, it was released from sacred use, enabling it to serve in a new capacity. A plaque to this effect still stands in the church which then became home to the Marie Nagel Gallery from 1991 to 2007.

In 1991, Marie Nagel bought the church and converted it into her art studio and gallery. She featured her own paintings plus the work of many local artists specializing in pottery, woodwork, textiles, art cards and more.

Marie studied art at the Alberta College of Art and has been drawing and painting most of here life. Her gallery gave her a place to really focus on what she loves. She works mainly in acrylics and suggests that…

“art gives my life meaning, it keeps me sane and enables me to claim a small platform on this earth to say far better than I could say in words what I need to say about my existence, and about the wonders of nature, in particular the landscape of the country”.

During her rich years in Wells, Marie gathered a loyal following who just loved her! By 2007, it was time to hang up the shovel (it snows a lot in winter!) and move to the warmer climate of Victoria where she still actively pursues her art form.

In that same year, photographer Gary Fiegehen bought the gallery and kept the doors open for business for another two summers. By the summer of 2010, the St. George gallery became a favourite venue for music performances during the Island Mountain ArtsWells Festival for not only is it a gorgeous setting the acoustics are phenomenal!

It continued as such when visiting the church after a fabulous ski trip on the initial lakes of the Bowrons, Gary noticed that the church walls were buckling under the snow load..

Some thing had do be done!

St. George Gets A Lift 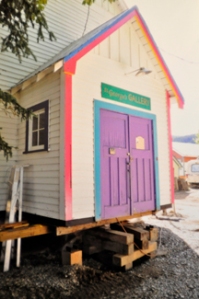 The summer of 2012 (have you noticed yet that in the snowy climbs of Wells, the years are marked by the summers?), the St. George Gallery found itself 10 feet up in the air! In the expert hands of Jim Belar and his hydraulic voodoo, the church was slowly raised for a complete new foundation to be laid. By the end of the season, she was gently lowered to the ground. With the addition of plumbing and renovation work in 2013, the gallery is now self contained with it’s own living space and is inspired to take on the next phase of it’s creative journey. Opening in Summer, 2014. 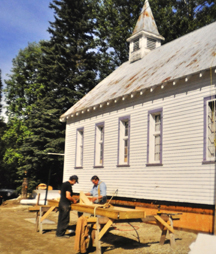 Gary Fiegehen studied photography at Ryerson Polytechnical Institute in Toronto when it was the only photography school in Canada and came west in the late 70’s. Working out of Vancouver he has made the B.C. landscape and the First Nations people the focus of his professional work.

In his latest body of work, entitled Sticks & Stones, exhibited at the Silk Purse in West Vancouver February 2014, Gary presents his personal work and honours the influence of the master photographers Minor White and Edward Weston. Their photographs and writings offered critical encouragement along the way.

These large B&W prints present three sequences, The Stein Valley, The Rock Garden and Trees Against a Winter Sky, and will be featured at the St. George Gallery. They celebrate the beauty and coherence found in the natural world and the joy of looking through a camera.

Gary believes the visual image can serve as a bridge between the outer and inner experience. He hopes the images provide a door for the viewers imagination and suggests that this work is less about invention and more about remembering. Remembering when the world was new and full of wonder.

Sara holds a BFA from the University of Victoria and is a practising artist. She is a full time coordinator of Visual Arts and teacher at Arts Umbrella, an art school for kids 2 to 19 covering all the disciplines. In her off time, Sara is more than likely to found on some remote outdoor adventure – where she enjoys plein air painting – a pursuit that has sustained her well over 20 years and has taken her around the world. Sara’s love for the Natural world is illuminated in her landscape paintings which will also be featured at St. George Gallery. http://www.ArtByWhitney.com

2 thoughts on “CALL OUT FOR SUBMISSIONS”